Turnkey hardening systems for the production of stabilizers

The transition from full stabilizers to tubular stabilizers means that bending no longer has to be hot, but cold. These untempered bent tubes still have to be quenched and tempered. At ThermProTEC, we have developed a special conductive heating station for heating to a quenching and tempering temperature of approx. 900 °C. This station is designed to meet the requirements of the bending process. In this process, the stabilizer is heated by a high current, similar to a light bulb. The wall thickness of the tube changed by cold bending significantly impedes homogeneous heating of the component. This essentially applies to all alternative heating processes with the exception of large hardening furnaces, which, however, have significant disadvantages in terms of process technology. In order to compensate for the negative effects of these wall thickness variations, our conductive process includes further methods. The conductive heating station is part of a complete quenching and tempering concept developed by ThermProTEC for stabilizers.

Components of the plant

The basis of our system is a generator with which currents of 12,000 A can be applied to the component. Further main components of the system are the mechanical positioning and clamping device, an adapted cooling system as well as an integrated loading portal, which serves for automatic assembly.

The stabilizer is tensioned on both sides with pneumatic grippers and electrodes through which the current is introduced. To insert the stabilizer, the electrodes must be positioned at the correct distance and angle. Optionally, the jaws can also be swivelled in a third plane. The distance adjustment is carried out with one or two servo motors with spindle drive. Depending on the model, the angle adjustment and rotation of the jaws is carried out manually or with servomotors with absolute encoders. During heating, the stabilizer expands and this expansion is compensated by the servo spindle axis during the process. This displacement during the process also allows the final contour to be adjusted. The different wall thickness also leads to temperature differences between the outside and inside of the arc in our process.

In order to compensate for this effect, we have integrated an additional local air nozzle cooling via a patented process. This significantly reduces overheating inside the sheet and significantly improves product quality. This significantly reduces the effect of grain size growth and decarburization. The arrangement of the nozzles can be quickly adapted to the corresponding stabilizer type in the form of a change tool. Several (up to five) pyrometers are used for quality control and process regulation, each of which can be optionally moved. This is important because otherwise the measuring point changes relative to the stabilizer. This enables us to achieve typical heating times of between 12 and 25 seconds, depending on the type of stabilizer. This rapid heating also reduces the time in which the stabilizer can scale.

A 2-axis loading gantry enables fast loading of a stabilizer in the station directly after a handling robot has removed the hot stabilizer. In production lines with optimized cycle times, a second robot can thus be dispensed with. The entire system is designed as a steel construction. This is made possible by Plug & Play commissioning.

You are interested, have questions or suggestions?
Our team is at your disposal. We look forward to your message! 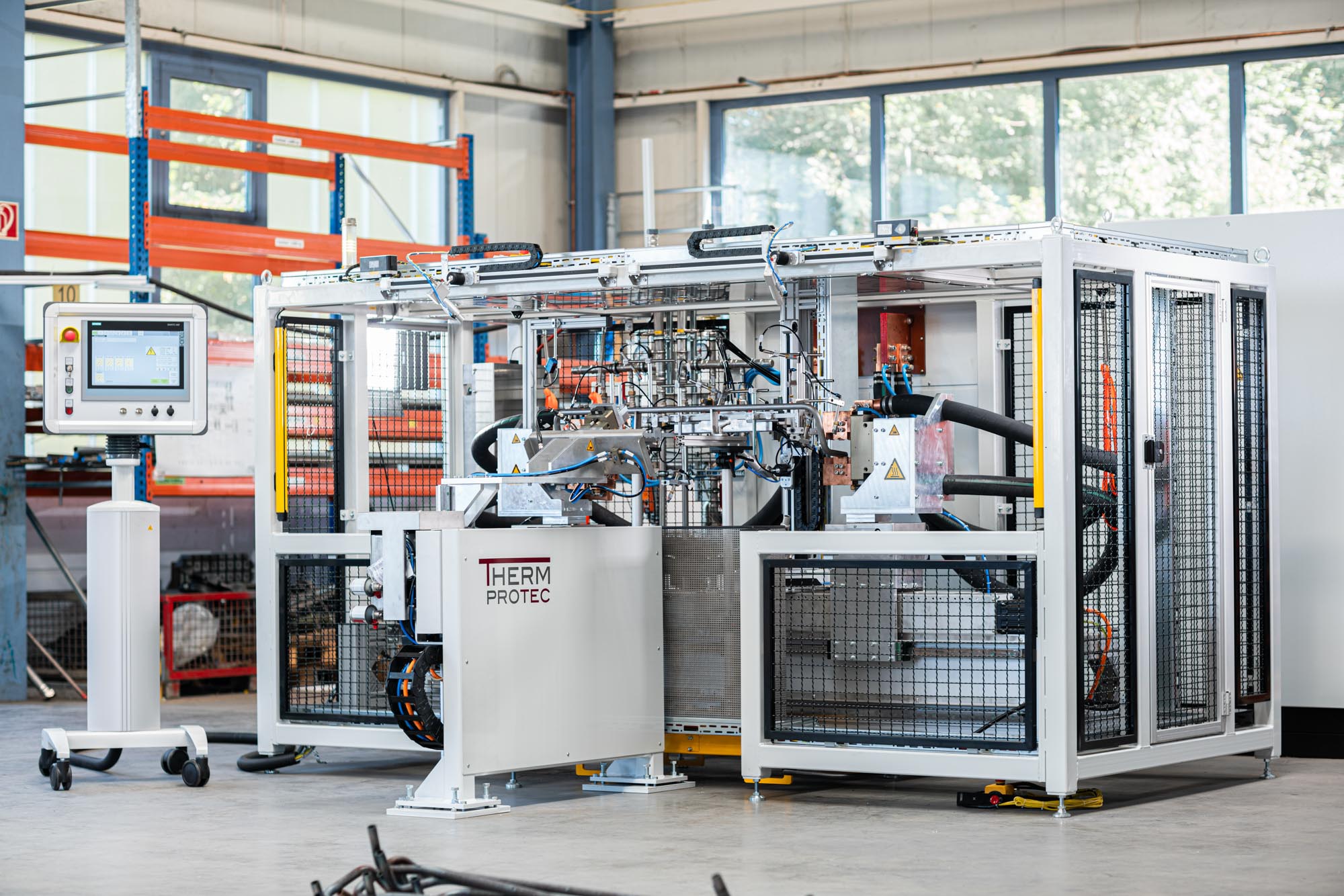 From process development to turnkey production facilities. We develop innovative solutions in the field of thermal process technology. From the automotive industry to mining, you are in good hands with us.